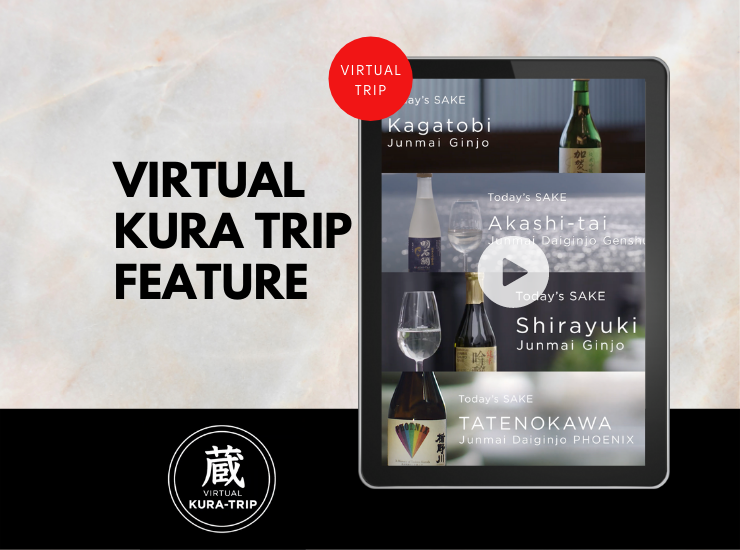 Very few people know about the diverse world of sake. The long history, production process, and cultural significance often become simplified through blurbs on a sushi drink menu. Sake makers and sake enthusiasts want to change the representation of sake around the world starting nearly at the source: the kura. Kura are sake breweries, and each Kura has its own methodology, history, and unique sake to share.

For this feature, we’ve selected four sake breweries: Tatenokawa, Akashi, Fukumitsuya, and the Konishi Breweries Here is a brief overview of each brewery’s philosophies, techniques, and sake showcase.

Located in the port city of Sakata, Yamagata, Tatenokawa opened its doors in 1832. The brewery prioritizes the use of high-quality ingredients when making their sake. They only use Yamada Nishiki rice in brewing, sourced from trusted contract farmers. This rice is grown without the use of pesticides or chemicals. As a result, all Tatenokawa sake is healthy, safe, and delicious.

Tatenokawa’s featured sake is their Junmai Daiginjo Phoenix sake. This sake is extremely light with a soft, smooth texture. The brewers extend the moromi, or main brewing period, to one full month at a low temperature. This produces clear, fragrant sake and a characteristically deep flavor profile.

Akashi Sake Brewery has run operations in their namesake Akashi, Hyogo for over 100 years. The company focuses on a single goal: to make authentic sake loved by the locals that complements local food. Their sake is the embodiment of a local product. They use water from the rivers surrounding Akashi and the best sake rice grown in their home prefecture of Hyogo.

Established in 1625, Fukumitsuya Sake Brewery sits nestled at the foothills in Kanazawa, Ishikawa. The brewery uses what is known as “100-year water” in the sake making process. This water originates at the peak of the prefecture’s tallest mountain from rain and snow accumulation. It then travels to the base in a process that takes around 100 years, resulting in pure, mineral-rich water.

Fukumitsuya’s featured sake is their Kagatobi Junmai Ginjo. This full-bodied sake has a versatile flavor profile that pairs well with a variety of dishes. When brewing this sake, Fukumitsuya closely watches their main fermentation process to balance sugar production and create a specific flavor.

Since 1550, Konishi Brewing Company has operated in Itami, Hyogo. Konishi considers healthy yeast production the most important step in the brewing process. By keeping the yeast in good condition, brewers can manipulate the aroma and flavor of sake without additives. The final sake aroma forms during the moromi fermentation process. Yeast in excellent condition produces a moromi with a clear, bright scent, similar to fresh apples.

Konishi’s sake showcase is Shirayuki Junmai Ginjo. A slightly acidic sake, Shirayuki pairs best with creamy foods, like oysters and other soft seafood. To best enjoy Shirayuki, establish the foundation with a first sip while chilled. Then, let the sake sit and acclimate to room temperature. This releases the aroma and deepens the flavor palette established during the first sip.

Junmai Ginjo sake boasts a broad flavor palette that can be enhanced or manipulated through food pairings and serving methods. All sake has strong umami elements that pair well with seafood. Sake and most whitefish have a reciprocal taste relationship, each enhancing each other’s milder elements. However, sake also contrasts with more flavorful fish, like red tuna. In these pairings, sake tastes mellow, letting its smooth texture shine.

Sake can be enjoyed with more than just seafood. The natural umami of rice shines with acidic, mellow sake. Lime juice and other citrus tastes complement the fruity aromas typical of Ginjo sake. Also, strong, full-bodied sake can even stand up to heavily salted dishes, rounding out a meal’s flavor profile.

Much like how several Merlot wines can differ, each bottle of Junmai Ginjo sake has its own unique properties. Combined with the distinct characteristics of each Kura, the opportunities to enjoy different sake are nearly endless. Luckily, there are several ways to taste each of them, whether enjoying it alone or pairing it with a meal.