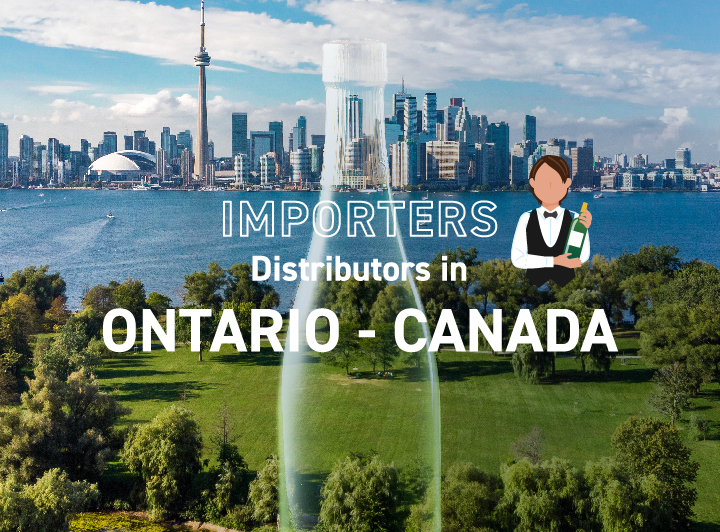 Like several other provinces in Canada and all across the United States, sake has seen a recent spike in popularity in Ontario. While Japanese sake breweries have shown a greater interest in broadening their market to the West, the number of North American importers and distributors has also grown considerably. The result of the efforts of both of these groups is the ability for customers to conveniently find a wide variety of delicious, high-quality sake in their local shops and restaurants.

In order to help those interested in learning more about those responsible for importing sake in their area, the following list showcases a number of different sake importers and distributors that are based in Ontario.

Sake Importers and Distributors in Ontario

The companies listed below include several importers of Japanese sake that supply local shops and restaurants with sake that is purchased straight from breweries in Japan. These companies are listed in alphabetical order.

Breakthru Beverages is a North American wholesaler of alcoholic beverages that mainly supply shops in the United States and Canada. Their portfolio of alcohol is incredibly extensive and includes popular brands of drinks. Breakthru Beverages also represents many bottles of sake from the portfolio of Vine Connections, another importer of alcoholic beverages that is based in California. This portfolio includes brands like Tozai, Tentaka, Kawatsuru, and others.

Bruce Ashley Group is an importer of several kinds of alcoholic beverages from various areas around the world. The company was originally founded in 1995 in Markham, Ontario, and currently markets for over 60 different kinds of beverages. Some examples include Bitburger from Germany, Tempt No. 9 from Denmark, Marston’s Hobgoblin from England, and Blue Chair Bay Premium Rum from the United States.

When it comes to sake, however, they are known for importing Hakutsuru Sake straight from Japan. This brewery first started producing sake in 1743 and has been in business ever since. Today it is one of the largest producers and exporters of sake and is enjoyed by many in the West. Bruce Ashley offers a total of seven different kinds of sake from Hakutsuru, including their traditional sake, draft sake, junmai ginjo sake, daiginjo sake, and more.

Halpern Wines is a family-owned importer of alcoholic beverages and is one of the oldest importers in Ontario. It was originally founded by Harold Halpern over 65 years ago and is currently run by his sons, Todd and Colin Halpern. Today, Halpern Wines imports products from 175 wineries, breweries, and distilleries from around the world, giving plenty of different wines and other drinks for the people of Ontario to enjoy.

Halpern Wines also represents Soto Sake, a brand of junmai daiginjo sake that is brewed with mountain spring water in Niigata prefecture. This particular sake won several achievements in North America since it was first imported, including a gold medal in the 2016 San Francisco International Wine Challenge, the Best in Show Award for the Beverly Hills Microliquor Competition, and a platinum medal in the Newport Beach Sip Awards. Those who enjoy a milder, more delicate sake will love sake, as it has a smooth flavor with tasting notes of apple, melon, and cucumber.

Kado Enterprise is an Ontario-based importer and wholesaler of Japanese sake. While importing sake is their main source of business, one of their main goals as a member of the Ontario sake industry is to help spread the awareness of quality Japanese sake and educate the people of Ontario about sake and its extensive history. Several of the founding members of Kado Enterprise also have family connections to a traditional brewery in Nagano, Japan, which helps bridge the gap between Japan and Ontario even more.

This company is responsible for importing sake from 12 different breweries from across Japan. Some notable examples include Kadoguchi, Katsuyama, Okunomatsu, and Urakasumi. Kado Enterprise offers links to each individual brewery on their website, making it easy for those who want to know more about the breweries they provide, though some of the brewery sites only offer pages in Japanese.

Kobrand is a US-based importer of wine and spirits that was founded by Rudolph C. Kopf in 1944. Although the company itself is based in New York, it distributes a surprising portfolio of wine, liqueurs, spirits, and other alcoholic beverages all throughout the United States and North America. Although it is mainly an importer, Kobrand has also created its own line of liqueurs.

This particular company also imports and distributes many kinds of sake owned by Joto Sake LLC. This includes Joto’s own brand of sake, as well as other brands like Chikurin, Seikyo, Taiheikai, and several more. As such, Kobrand is responsible for supplying restaurants and stores with a surprising amount of sake, adding plenty of variety for people to choose from in their local shops.

Their entire catalog is available for viewing on their website, though they only offer their products by the case. Those curious about purchasing sake through Metropolitan Premium Wines and Sakes can contact them via the website, email, and phone number listed below.

Nippon Sake Imports is a company that strives to bring sake and other Japanese alcoholic beverages from many local-scale breweries to the Ontario area. As a result, they offer a wide range of different kinds of beverages from all across Japan. In total, Nippon Sake works directly with 20 Japanese breweries to make sure they provide the highest quality drinks to its clients and customers.

Like several other sake distributors listed above, Nippon Sake Imports also hopes to teach the citizens of Ontario about sake. Their website includes descriptions of each of the breweries it imports and a page about the sake brewing process that includes information about several types of sake.

Ozawa Canada was founded in the early 1990s and was originally a Canadian distributor of Japanese tea. That said, their line of products eventually expanded into many other fields, including cookware and food. Since then, their influence regarding sake in Canada continued to grow. Like Metropolitan Premium Wines and Sakes, they co-founded a sake festival called Kampai Toronto, which is considered to be the largest sake festival in Canada.

With such an impressive track record, you can imagine that they are responsible for distributing an impressive amount of sake, which is most certainly true. Ozawa Canada lists over 100 different kinds of sake under many different brands, some of the most notable being Hakkaisan, Kubota, Otokoyama, and Sho Chiku Bai. Since they are a wholesaler, Ozawa Canada only lists their sake by the case. That said, those who are interested can send in an inquiry on their website.

Select Wines is a wine importer that was originally founded in 1982 by Pierre L. Doise, the son of a pre-WWII wine shipper from London. After growing up around wine his entire life, Doise decided to make a business out of his passion for the beverage and began importing and selling wine from around the world. In 2017, Doise would retire from his business and be succeeded by Chris Hoffmeister, the current CEO of the company. Select Wines would later go on to be one of the founding members of the Sake Institute of Ontario

While most of Select Wine’s portfolio contains grape wines from countries like France, Italy, and the United States, they also carry a few bottles of Japanese sake as well. Their selection of sake and other Japanese beverages specifically comes from the Gekkeikan brand, which includes their traditional-style junmai sake, a style of sake that refers to sake that is made with no additives.

That’s Life Gourmet Sake and Wine is an alcohol distributor, yet offers a wide range of types of sake and wine with plenty of different flavor profiles. The company was founded in 1997 and, since its conception, focused on bringing sake and wine from small volume brewers from Europe and Japan. Since they generally carry lesser-known brands, it is often hard to find the bottles that they sell at any other store, save for the ones they supply. Despite being an importer, That’s Life Gourmet Sake and Wine also has an online shop that anyone can buy from. Their website also has information regarding each brewery that they are responsible for importing, which includes both traditional and modern producers.

This shop offers single bottles of wine and sake, as well as full cases for those interested in buying in bulk. They also offer mixed cases that combine both wine and sake for added variety. Each listing includes important information when choosing a sake, like the type of sake it is, the region it was brewed in, the type of rice used and its level of polish, and tasting notes.

While importers and distributors of Japanese sake certainly do their fair share of promoting sake to people in Ontario, there are a couple of other major notable figures in the sake industry in Ontario that are worth mentioning.

Ontario Spring Water Sake Company first began brewing sake in early 2011 and is a co-founder of Kampai – Festival of Sake. It is located in the Distillery Historic District of Toronto and brews traditional sake using local Ontario spring water. Since they produce their own sake locally, its customers can enjoy freshly brewed namazake, a luxury that is usually only available to those living in Japan. They distribute their “Izumi” brand of sake to local shops and restaurants in the surrounding area.

Liquor Control Board of Ontario

The Liquor Control Board of Ontario (LCBO) is a government enterprise of Ontario that acts as one of the largest retailers and wholesalers of alcoholic beverages in Ontario. Since its establishment in 1927, the LCBO has helped stock and run over 660 retail stores with tens of thousands of products from various countries around the world.

The LCBO upholds the regulations, checking, and licensing when importing new brands of alcohol, including sake into Ontario. Therefore, as one of the largest and most influential importers in Ontario, you will find that many of the products from the importers listed above can be found in stores run and stocked by the LCBO. In fact, the LCBO lists approximately 300 different bottles of sake on their online catalog. This list includes Izumi sake from the Ontario Spring Water Sake Company, Hakutsuru sake from the Bruce Ashley Group, Okunomatsu sake from Kado Enterprise, and much more.

As the world continues toward a more global mindset, interest in other foreign cultures will rise as well. As such, people in Ontario and other parts of Canada will likely learn more about Japanese products like sake and desire to try them.

Fortunately for Ontario, the numerous importers and distributors of sake based in the area make it easy for people to find lesser-known and high-quality bottles of sake that they can’t find anywhere else. With their collective desire to raise awareness of sake and bring sake to Ontario, these distributors give customers access to more kinds of sake than they could ever need!