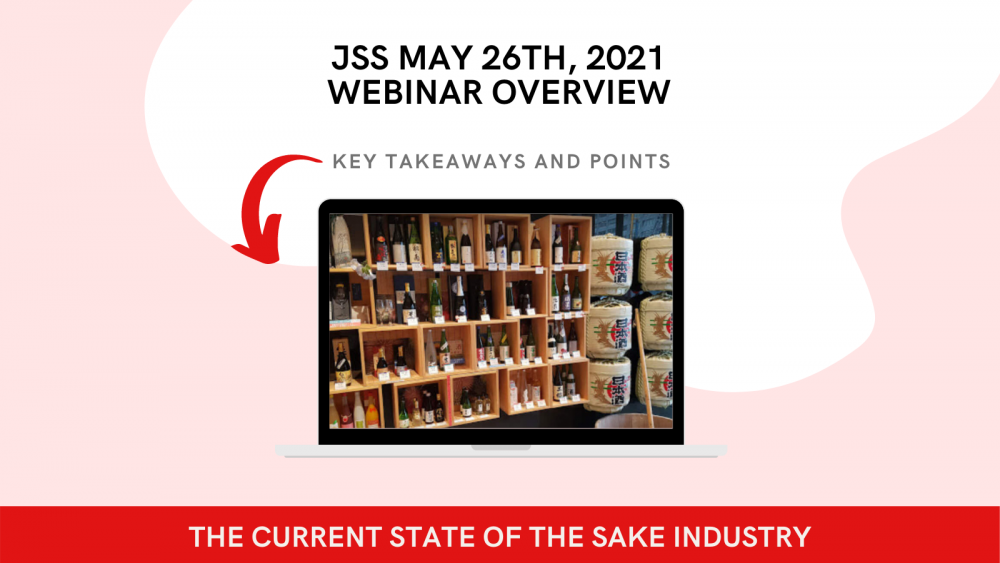 For most people outside Japan, sake may seem like a foreign, specialty alcohol. We, at JSS, want to open up channels for education and broaden public understanding of sake. On May 26, 2021, we hosted an online seminar providing a comprehensive look at the sake industry. Four speakers presented information on key categories regarding sake: the state of the sake industry, sake exports, the status of sake production, and the domestic sake market. Here’s a quick overview of the main takeaways from the webinar.

The State of Sake Industry

JSS Vice President Yoshiro Okamoto leads the discussion on the past, present, and future state of the sake industry.

The History of Sake

The history of sake brewing in Japan dates back at least 2,000 years. Early records from the 4th-century detail the development of koji fermentation. During the Heian period, the Imperial Court began to manage sake production, forming an official Sake brewing office, Miki no Tsukasa. In 1904, the Meiji government established the National Research Institute of Brewing. The Institute’s main focus is to develop sake brewing technology. It remains the only national research institute in the field of alcohol brewing today.

Today, most sake makers are on the main island of Honshu. The top producers can be found in Niigata, Nagano, and Hyogo prefectures. However, the breweries in Nada, Hyogo, and Fushimi, Kyoto contribute to 50% of all production. As of 2021, JSS is affiliated with 1678 members: 1394 sake, 271 shochu, and 13 mirin makers–under 47 regional associations.

Domestic shipping has decreased by roughly 76% in the last 45 years. Licensed breweries also declined by 51% during that time. However, export revenue and volume have increased by 183% and 57% respectively since 2010. The last 30 years saw a steady shipment decline. Possible reasons for the decline include more popular drinks available and the lack of appeal to youth. In 2020, COVID-19 greatly impacted restaurant drinking, causing the biggest hit to sake revenue.

JSS devised three missions going forward from 2020. First, to promote sake and shochu domestically and internationally. Second, to provide educational opportunities for people to learn about sake and shochu. And third, to support the development of new technology and educational programs regarding sake production.

The decline in popularity led to a sake production shift from quantity to quality in order to raise productivity. One strategy to promote quality-centered marketing is with Geographical Indication: using regional identity to indicate social value, like champagne. JSS also wishes to register sake as Intangible Cultural Heritage with UNESCO due to its historical, unique production methods. Lastly, JSS plans to demonstrate sake in Osaka Expo 2025 and promote sake around the world.

Since 2007, sake exports have increased the most in the US and China. In the wake of the COVID-19 Pandemic, sake exports to the US saw the greatest decline. However, some export areas saw massive growth even during the pandemic. Exports to China and Hong Kong increased through the pandemic, continuing a 300% growth trend over the last three years.

To promote export market growth, JSS developed three main goals. First, raise awareness of sake as a category of alcohol to buyers and consumers. Second, disseminate general appeal for sake. Lastly, correct the misunderstandings of sake outside of Japan.

To improve brand image and build credibility, JSS plans to form relationships with influencers and sommeliers. Through business-to-business relations, JSS will promote sake at sales expos and convince distributors on how sake can be a unique selling point. Most importantly, many consumers still consider sake foreign or a niche alcohol. JSS plans to promote education, familiarizing sake with consumers outside of Japanese food.

During 2020, JSS persisted in promotion efforts while adapting to the effects of the pandemic. To address branding and influence, JSS hosted a Sake Master Class webinar for sommeliers. Early in the year, JSS promoted sake at expos mostly in Asia and Oceania, including the JSS Sake and Shochu Academy event in Tokyo. On a global scale, consumers could interact with online educational tools.

In 2021, JSS plans to proceed with a combination of online classes and expo events. One of the most important goals is to expand into the wine market by campaigning to include sake in wine sommelier contests. JSS also looks to expand to new markets beyond Asia and North America, such as participating in the ProWein 2022 expo in Dusseldorf, Germany.

Director of JSS Hitoshi Utsunomiya explains the current state of sake production and developments regarding technology and the workforce.

In the last 10 years, rice consumption for sake production increased due to the increased production of specially designated sake. Overall, Yamada Nishiki remains the dominant choice for sake rice. However, a combination of brown rice production and the development of more regional sake rice varieties have raised quality levels and overall unit prices.

Toji and the Workforce

Toji, sake brewmasters, traditionally came from a seasonal working population, such as farmers working in the off-season. In 1986, seasonal toji made up almost 75% of all brewers. However, by 2016, that percentage dropped to less than 20. Today, most toji work as full-time employees, brewery owners, or come from brewery-owning families. The number of toji registered as members in regional organizations is decreasing. As a result, more regional associations shifted from apprentice-type guilds to skill-developing training organizations.

New rice milling technology polishes rice from all sides, leading to more efficient removal of excess proteins around the kernel. This allows for 40% polished rice to have the same amount of proteins removed as 60% polished rice in the old methods. Now, high-quality sake production results in less wasted rice.

For quality control, the production method now includes more measures to maintain freshness before distribution. Rather than pasteurizing sake in drums and then bottling, new methods involve pasteurizing after bottling to introduce less oxygen into the sake. Lower temperatures throughout the process will also give brewers more control over quality.

In the last 15 years, ginjo and junmai sake have seen changes in their components and flavor profiles. Ginjo is sweeter and fruitier due to an increase in extract percentage. Junmai still has the strongest umami flavor of all sake but has seen a decrease in amino acids due to smaller rice polishing rations.

Brewers are reviving traditional, time-consuming brewing methods to increase sake quality, such as ki-moto and bodai-moto. These prolonged yeast preparation methods give sake a more complex flavor and finish. However, the longer production time leads to less output, signaling the shift from quantity to quality. More brewers have engaged in diversifying sake production. Output has increased in specialized sake, such as long-aged sake and sparkling varieties.

However, futsushu still occupies 65% of the market and remains popular with the elderly demographic. Strategies to improve sales include expanding categories of specially designated sake and broadening the appeal of inexpensive futsushu with the younger demographic.

Sales figures suggest that the increase of overall sake appeal correlates with more choices for consumers. Going forward, JSS plans to aid development in creating a luxury sake class, including products like ultra-polished daiginjo or sparkling sake. The luxury class sake will likely launch within the next five years.

Influence of COVID-19 on the Sake Market

The State of Emergency enacted in response to COVID-19 closed restaurants and ended alcohol sales by restaurants. While restaurants can now reopen, alcohol sales have not been reinstated. During the pandemic, at-home consumption stayed the same as previous levels but did not increase to compensate for a lack of restaurant consumption. This led to an overall industry distribution decrease, particularly damaging to intermediate-class breweries selling to restaurants.

To counter the vulnerability of the restaurant market, JSS plans on promoting sake sales in the household market. Campaigns will focus on integrating sake into daily life, such as pairings with casual foods and events like camping.

The complexity of the sake industry reflects the complexity of the drink itself. Rather than a limited, niche variety, sake has the potential to become an entire category of alcoholic beverages around the world. One day, sake can rival wine and beer as the spirit of choice when toasting a friend, relaxing after work, or simply when eating a meal.