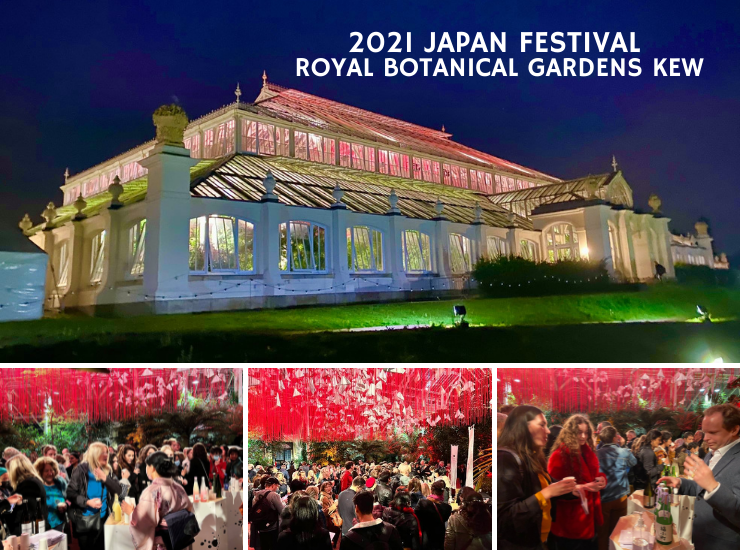 Last month in October, the Japan Sake and Shochu Makers Association participated in the Japan Festival at the Kew Royal Botanical Gardens. The festival is a newly introduced event that provides visitors the chance to experience the art, plants, and culture of Japan.

About the Kew Gardens

The Kew Gardens was originally founded in 1840 and is located in Richmond, UK. The garden boasts an impressive 8.5 million different species of plants and fungi within its walls. Aside from its collection of plants and fungi, the Kew Gardens is also known for its tranquil Japanese landscape, which includes a replica of the Chokushi-Mon. The Kew Gardens is one of two gardens that is owned and run by Royal Botanical Gardens, Kew. Throughout the year, Royal Botanical Gardens, Kew hosts a variety of events at the Kew Gardens, including the Japan Festival, which was first introduced in 2021.

In addition to the main festival, the Royal Botanical Gardens also sponsored an event titled “Japan After Hours” on October 8, 9, 15, and 16. On these days, Japan House London, with the aid of JSS, set up a sake bar and allowed visitors to taste and compare many kinds of sake. The sake team supporting JSS in London were on-hand to provide more in-depth insight on the different kinds of sake, how sake is brewed, and individual breweries to visitors and strived to generate more awareness and appreciation of Japanese sake. The turnout and reception of the event was spectacular.

Offer not only Knowledge but Passion As Well

The following comment is from Rie Yoshitake, a member of the support desk of JSS in the UK.

“Offer not only knowledge but passion as well”. This is what I believed after the event at Kew Gardens came to an end — that what was important wasn’t the information about rice polishing, brewing methods, brewery history, or food pairings. That all can come later. All it takes is for someone to try sake to have them saying, ‘Wow, this is delicious, what is this?” and truly get them curious. Tasting is believing! From that point, they can do their own research. The UK is already rich with craft wines, beers, and other spirits that reflect their brewers. As such, when compared to Japanese people who put all of their wisdom and form into their craft, Europeans — and those in the UK in particular — are much more individualistic and open to forging their own path, doing things themselves, and making their personal preferences clear. Rather than going through all of the crazes and fads that come and go, once something is introduced into the food culture of the area, it sticks around for years to come.

At the Kew Gardens, I believe I saw sake being adopted by many at the event. Many guests from several generations never tried sake before, and each individual had their own preconceptions, prejudices, and misconceptions of sake. Despite this, however, after tasting the delicious ginjo, sparkling, nigori, aged, and yuzu sake that was at the sake bar, we saw the spark of passion ignite through their excited expressions. Even though the line for the event was long, some people came through several times for multiple tastings. Later those nights, people likely shared their experiences with their friends and family. Perhaps they will even start buying bottles of sake to drink at home or give them to others. The thousands of people who came to taste sake and were genuinely impressed also likely shared their thoughts about sake on social media, which broadened the influence of this event to tens of thousands.This was the busiest and most awakening sake event I ever witnessed. I am very grateful to both Kew Gardens and Japan House London for the opportunity.”